The large aroid family, Araceae, integrates more than 4000 species of mostly tropical perennials and lianas and includes countless genera that are popular and well known ornamentals such as Alocasia, Amorphophallus, Anthurium, Arisaema and Philodendron. 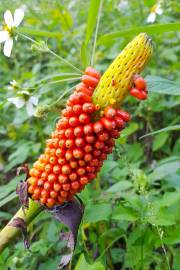 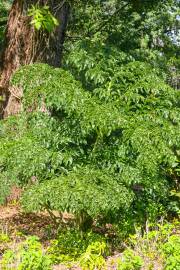 Amorphophallus paeoniifolius
A giant aroid that grows an enormous, single pinnate leaf on a thick, fleshy stalk from a huge, bowl-shaped tuber, about 30 cm (1 ft.) in diameter. When the leaf wilts in Winter or the dry season and the plant goes into dormancy, the tuber can be dug up and stored dry. Before a new leaf is produced,..
From EUR 5.40 In Stock
Add to Wish List
Add to Compare 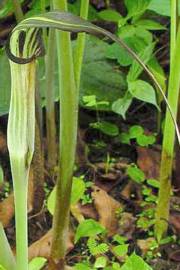 Arisaema concinnum
This cobra lily is widely distributed from the Himalayas to northern Myanmar and southwestern China at high altitude between 1700 and 3600 m and produces a large inflorescence in summer, clothed in a stunning dark purple or almost black spathe with vertical white stripes that usually produces a whip..
From EUR 5.10 In Stock
Add to Wish List
Add to Compare 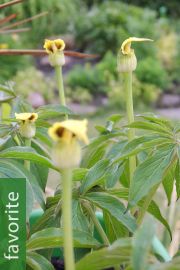 This attractive small aroid has a huge distribution area from the highlands at the Horn of Africa through the mountains of Arabia and Afghanistan and the Himalayas to southern central China. It sports palmate leaves and a pretty, yellow inflorescence followed by reddish fruits in autumn. In cultivat..
From EUR 5.10 In Stock
Add to Wish List
Add to Compare

This cobra lily is distributed from the Himalayas to Yunnan in southwestern China at high altitude. Its inflorescence is clothed in a greenish to purple spathe and produces a long, whip-like tip. The single, large, glossy leaf is palmate and deeply lobed to the base into 3 broad segments. The foliag..
From EUR 5.10 In Stock
Add to Wish List
Add to Compare 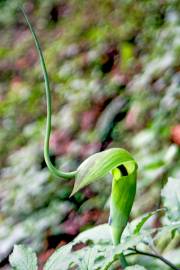 This cobra lily is widely distributed from the Himalayas and southwestern China south to Myanmar and India. It produces a green inflorescence in summer that has a long, upright green or purple tip like an antenna. The glossy, palmate leaves can get quite large. The foliage dies in fall and the plant..
From EUR 5.10 In Stock
Add to Wish List
Add to Compare A small, perennial, deciduous aroid with attractive, purple spotted leaves and an upright, greenish inflorescence followed by by densely clustered, bright orange red fruits. Arum maculatum is widespread in woodlands in much of Europe to the Black Sea and makes an attractive ornamental, popularly use..
From EUR 5.10 In Stock
Add to Wish List
Add to Compare

Originally native from Mexico to tropical South America, where it grows in wetlands, typically in shallow, stagnant water, this perennial has invaded large parts of Southeast Asia, where it is considered a nuisance but is also appreciated and widely consumed as a vegetable, either raw or cooked. It ..
From EUR 5.20 In Stock
Add to Wish List
Add to Compare

new
Philodendron bipinnatifidum
= Philodendron selloum, Thaumatophyllum bipinnatifidum
A well known, large, terrestrial or partially epiphytic Aroid from southern Brazil, northern Argentina and Paraguay with big, pinnate, palm-like leaves. Makes a robust and easy to grow ornamental plant that is also perfect for indoors, even thou perhaps a bit large. ..
From EUR 5.20 In Stock
Add to Wish List
Add to Compare

An Arisaema-like aroid native to central and southern China, where it grows in the understory of forests. It produces large, palmate leaves and slender, long, green, whiplike inflorescences. Very easy to grow in a wide range of temperate and warm temperate climates...
From EUR 5.20 Low Stock
Add to Wish List
Add to Compare 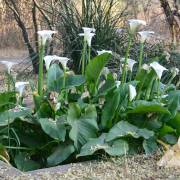 Zantedeschia aethiopica
Lily of the Nile

A well known and widely popular perennial in the aroid family, originally native to South Africa, with broad, fleshy, bright green leaves and white, funnel-shaped inflorescences. It is widely cultivated in warm temperate climates as an ornamental and for cut flowers. With generous mulching it is har..
From EUR 4.80 In Stock
Add to Wish List
Add to Compare
Showing 1 to 12 of 12 (1 Pages)
Best Sellers in This Category View all