Quantity:
3 comments  |  Write a comment
Description Attributes Customer Comments (3)
A moderately sized banana from northern Thailand, Laos and Vietnam that has previously been associated with both M. acuminata and M. balbisiana but is now thought to be Musa itinerans, close to the recently described variety guangdongensis but not the same as it grows considerably bigger and has suckers developing 2 to 3 m (7 to 10 ft.) away from the main plant rather than the tightly clustering habit of Musa itinerans var guangdongensis. The mature fruits are bluish to purple, rather small, and are locally used in Thai cuisine.
Sort by: 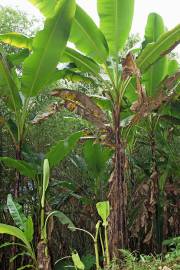 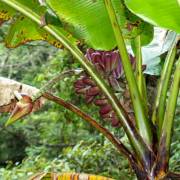 Musa itinerans var. formosana
From EUR 6.40
In Stock
A medium sized banana reasonably common in conifer forests on the island of Taiwan to 1800 m. In cultivation it is best suited to warm temperate clima... 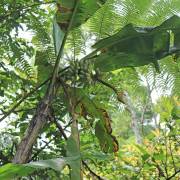 Musa itinerans var. chinensis
From EUR 6.80
In Stock
A medium sized banana to about 4 m tall from southern China, where it grows on steep slopes, in valleys and ravines between 300 and 1800 m. It is one ... 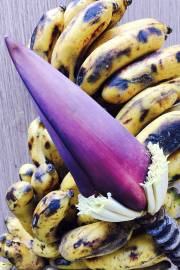 Musa acuminata var. tomentosa
Sulawesi Banana
From EUR 10.70
In Stock
A rare variety of the well known and variable Musa acuminata, endemic to northern Sulawesi, Indonesia. It has purplish brown petioles and would make a...
Customers who bought this item also bought