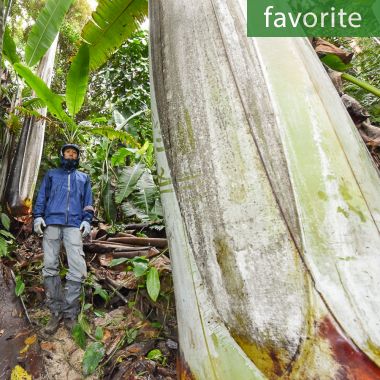 Product Code: Y3-34000
Ornamental Value: One of a kind
Favorites: For Collectors
Availability: In Stock

To more than 20 m tall, this enigmatic giant banana from the mysterious mountains of New Guinea is the undisputed record holder for the largest and tallest non-woody plant in the world.

Quantity:
0 comments  |  Write a comment
Description Attributes Customer Comments (0)
There are few other plants so fervently sought after as this enigmatic giant banana from the rugged and mysterious mountains of New Guinea. With a trunk to at least 15 m tall, about a meter in diamater at the base and a total plant height of 20 m or more, it is the undisputed record holder for the largest and tallest of the bananas and the largest non-woody plant in the world. It surely is one of the wonders of nature how an herbaceous plant growing from an underground rhizome and producing a pseudostem made up solely of densely packed leafbeases can reach a size larger than many woody trees. The pseudostem of Musa ingens is slightly swollen towards the base and covered in a whitish waxy layer, somewhat reminiscent of Ensete glaucum, just a lot larger. It holds a crown of about 12 fairly stiff, ascending leaves to 6 m long. The large inflorescence can hold over 300 oblong fruits to 18cm long that are filled with blackish brown seeds and yellowish pulp that is edible, sweet and delicious when cooked and reminds of fine butternut squash mixed with a sweet banana with a dash of tangy lime and citrus added. Musa ingens is native to montane rainforests throughout New Guinea between about 1300 and 2000 m elevation and usually found in wet sites in steep ravines or on the edges of highland swamps. Few seeds have ever made it into cultivation in the past and most have perished before their time because they were handled incorrectly or picked immature. Our collectors are understandably rather proud of their amazing achievement. In cultivation, Musa ingens requires conditions that would suit tree ferns rather than regular bananas. Due to its highland habitat, like many Ensete it will not grow in tropical lowland climates but succeed only at some altitude where nights are cooler, or in oceanic, warm temperate climates such as Portugal, northern New Zealand, coastal California, coastal southern Brazil or on Atlantic islands such as Madeira or the Canary Islands.

Bananas have a reputation of being rather difficult to germinate. Germination is likely most successful in conditions similar to those in their natural habitat. In the case of Musa ingens, that is damp, with warm days and cool nights. However, bananas do not germinate on the forest floor under a closed canopy. They can not grow in deep shade. They are opportunistic plants with seeds that may lie in the soil for many years until a rare event brings down a canopy tree and light can reach the forest floor. Often, fires can cause such damage. Then, direct sunlight can reach the soil where the seeds are buried. To simulate these conditions, to break down germination inhibitors likely contained in the seeds and to trigger germination, we expose them to
1. Heat, by pouring a small amount of boiling water over the seeds and letting them soak for 24h, then shallowly planting them and placing the pots on a heat mat. 2. Smoke, by sprinkling ash on top of the soil and watering them a few times with ash water, or alternatively treating them with smoke extract. 3. Light, by placing them under strong artificial light or filtered sunlight.
If done right, these treatments can quickly bring about germination at a high percentage.
Sort by:

Puya raimondii
Queen of the Andes, Giant Bromeliad
From EUR 5.80