Adenia isaloensis
A succulent dry deciduous vine from Madagascar that forms a small, swollen caudex from which slender shoots emerge during the wet season...
From USD 5.80 Out of stock

A dry deciduous or evergreen, succulent shrub to about 3 m tall, native to dry wood or grassland in southern Africa to 1200 m. It forms a thick, swollen, smooth trunk with only a few branches, each of which holds a terminal tuft of small simple leaves. In winter, during the plants leafless stage, ma..
From USD 7.13 In Stock 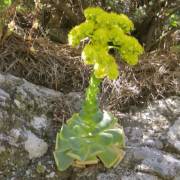 Aeonium aureum
Canary Golden Mountain Rose
= Greenovia aurea
A stunning, small succulent, native to the Canary Islands to 2000 m elevation, where it is found on steep, rocky slopes or cliffs. It forms a small, very compact and mildly clustering rosette of broad, grayish green leaves that usually have a more or less pronounced red hue. In cultivation it is bes..
From USD 5.02 In Stock 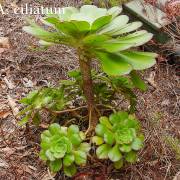 Aeonium ciliatum
This Aeonium from Tenerife in the Canary Islands grows into small shrub with a sparsely branching stem and flatish rosettes of succulent, spoon-shaped leaves. ..
From USD 5.02 Low Stock 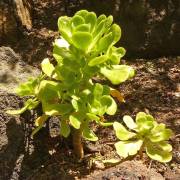 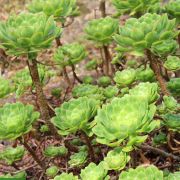 Aeonium lancerottense
A magnificent, compact, densely branching succulent with compact rosettes of spoon-shaped leaves, found exclusively on dry Lanzarote in the Canary Islands, where it is rather rare and endangered...
From USD 5.02 In Stock 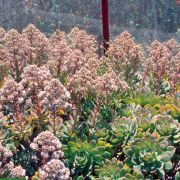 Aeonium percarneum
A lovely small shrub to about 1 m tall, native to Gran Canaria in the Canary Islands to 1300 m. It sports a sparsely branching stem, fairly large rosettes of succulent, spoon-shaped, bluish green leaves with reddish margins and compact whitish inflorescences. In cultivation it is best suited to fros..
From USD 4.79 In Stock 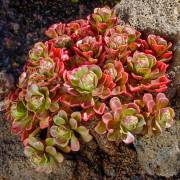 Aeonium spathulatum
A popular species from the Canary Islands with branching stems and rosettes of small spoon-shaped leaves...
From USD 4.79 In Stock 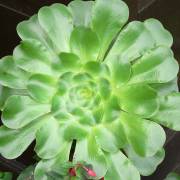 Aeonium undulatum
A larger Aeonium from Gran Canaria in the Canary Islands between 300 and 1500 m with a sparsely branching stem to 2.5 m tall and succulent, spoon-shaped leaves that form flatish rosettes to an astonishing one meter in diameter. The conical inflorescence holds countless yellow flowers...
From USD 5.02 In Stock

A strange dry deciduous tree from Madagascar that grows several tall, sparsely branched but excessively thorny, stiffly upright shoots with small, succulent leaves. In cultivation it is suitable for drier warm temperate to tropical climates in USDA Zones 10 to 11 and marginal in Zone 9...
From USD 5.35 Out of stock 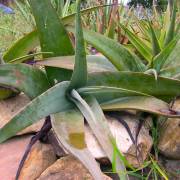 A mid-sized Aloe from cliff sides in southern Jemen with attractive, broad, finely tipped, pale bluish green leaves and greenish or pale pink flowers. It is easy to grow in warm temperate and dry tropical climates in USDA Zones 9 and above...
From USD 7.25 In Stock

A medium-sized, solitary, trunkless Aloe native to rocky areas in grassland and savannas from Zimbabwe and Botswana to Limpopo province in South Africa with broad, thorny (especially when young), light bluish green leaves and tall, sparsely branched inflorescences with red to yellow flowers. It tole..
From USD 5.46 In Stock 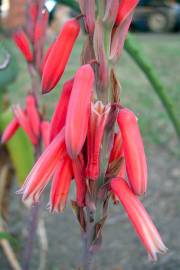 A small, shrubby, branching Aloe from limestone cliffs at low elevations in southern Madagascar with green, reddish tinged leaves and upright, sparsely branched inflorescences with red flowers...
From USD 5.69 Out of stock 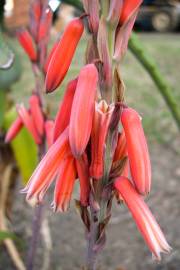 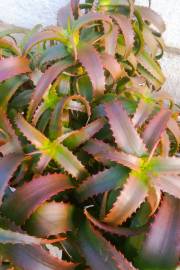 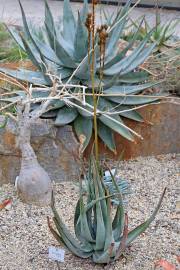 A solitary, stemless Aloe native to northeastern South Africa, where it grows on rocky slopes in grass and scrubland between 1200 and 2000 m. It forms a low rosette of broad, pale green leaves that gives rise to fairly large, branched inflorescence with red flowers. It is tolerant of drought and som..
From USD 5.02 Out of stock

A large Aloe native to low, dry scrubland in South Africa's Cape Province that can form stems to 4 m tall covered in persistent dead leaves. The broad, deeply keeled leaves are dull green to bluish, the large inflorescence is branched only in a few long, densely flowered spikes. As easy to grow as m..
From USD 5.35 In Stock 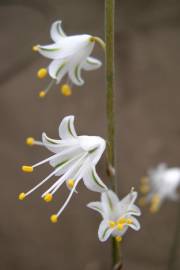 Aloe albiflora, EU ONLY
An unusual dwarf Aloe with narrow, rough, white spotted leaves and a small, unbranched, upright inflorescence with dainty, white flowers. A native of southern Madagascar, it has not been seen in habitat for more than half a century and is now presumed to be extinct in the wild. Fortunately it is eas..
From USD 5.91 Out of stock

Aloe albovestita
A dwarf Aloe from deserts in Djibouti and northern Somalia with broad, white spotted leaves. Very rare in cultivation...
From USD 6.91 Out of stock

This mid-sized Aloe from the tiny Comoro Islands northwest of Madagascar was described as a new species as recently as 2006. It sports a short trunk topped by a spreading rosette of finely tipped, mid green leaves and sparsely branched inflorescences with orange red flowers. A great Aloe for tropica..
From USD 7.92 Out of stock 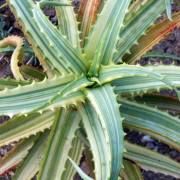 A rare, variegated form of the popular Krantz Aloe. Aloe arborescens is a large, trunking, bushy, branched Aloe to about 3 m tall with wide, green or bluish leaves and orange red or very rarely yellow flowers. It is native to a variety of habitats from the Cape in South Africa northeast to Mozambiqu..
From USD 6.47 Out of stock 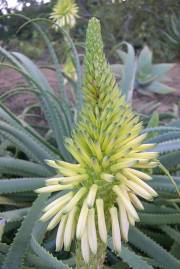 Aloe arborescens is a large, trunking, bushy, branched Aloe to about 3 m tall with wide, green or bluish leaves. It is native to a variety of habitats from the Cape in South Africa northeast to Mozambique, Zimbabwe and Malawi from low to high elevations. Aside from being an easy to grow ornamental f..
From USD 5.69 Out of stock

A large, trunking, bushy, branched Aloe to about 3 m tall with wide, green or bluish leaves and orange red or very rarely yellow flowers. It is native to a variety of habitats from the Cape in South Africa northeast to Mozambique, Zimbabwe and Malawi from low to high elevations. Aside from being an ..
From USD 5.35 In Stock 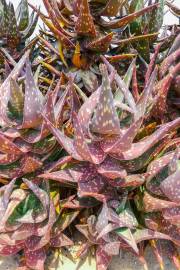 This beautiful and fairly rare Aloe forms slender, creeping stems with short, thick leaves that are covered in small, white spots and are often reddish or purplish. It is native to South Africas Cape Provinces, where it grows on dry, sandy coastal plains just above sea level. It grows very localized..
From USD 6.47 In Stock 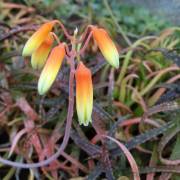 Aloe bakeri, EU ONLY
A small, densely clustering Aloe that forms pencil thin shoots with narrow reddish tinged leaves that are sometimes mottled, especially below. The small, unbranched inflorescences hold terminal clusters of tubular flowers that are reddish towards the base and yellow towards the tip. Aloe bakeri is n..
From USD 5.91 Out of stock

A large, solitary stemmed and endangered Aloe from dry deciduous bushland in southeastern Kenya and northeastern Tanzania. Not to be confused with he rather modest A. ballii from Mozambique and Zimbabwe...
From USD 5.69 Out of stock

Aloe betsileensis
A stunning, mid-sized Aloe native to the dry plateau betwen 500 and 1500 m in southern central Madagascar with up to 50 pale blue leaves that have a pink tinge when older and are armed with reddish thorns along their margins. The inflorescence is an unbranched spike that stands well above the leaves..
From USD 5.69 Out of stock
1 2 3 4 5 6 7 8 9 10 11 .... > >|
Showing 1 to 30 of 377 (13 Pages)
Recently Purchased by Other Cutomers