Quantity:
0 comments  |  Write a comment
Description Attributes Customer Comments (0)
This rare, medium-sized, loosely clustering Agave grows compact rosettes of moderately broad, stiff, upright, bluish leaves. It is similar to Agave verdensis but holds more and narrower leaves. It is native to only a few sites in desert grassland or pinyon-juniper woodlands on rocky soils between 900 and 1200 m in Arizona. As it is found exclusively near prehistoric sites or human habitation, Agave yavapaiensis is a presumed to have originated as a domesticated plant of the Yavapai tribe after which it is named and who presumably used it for food and fiber. It produces only few seeds and is even more rare in cultivation than in its natural habitat. It is a robust, cold hardy and drought tolerant Agave that can be grown in a wide range of temperate climates.
Sort by: 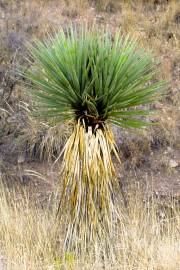 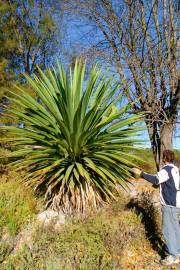 Furcraea longaeva
Pescadillo
From USD 6.27
In Stock
A truly majestic and absolutely magnificent plant closely related to Agave, that forms a very large, dense crown up to 4 m (13 ft.) across. The crown ...

Agave salmiana var. ferox
Maguey de Pulque
From USD 5.51
In Stock
A massive and beautiful Agave from the Mexican states of Guanajuato, Oaxaca and Puebla that forms a dense and very neat rosette of wide, dark green to...
Customers who bought this item also bought